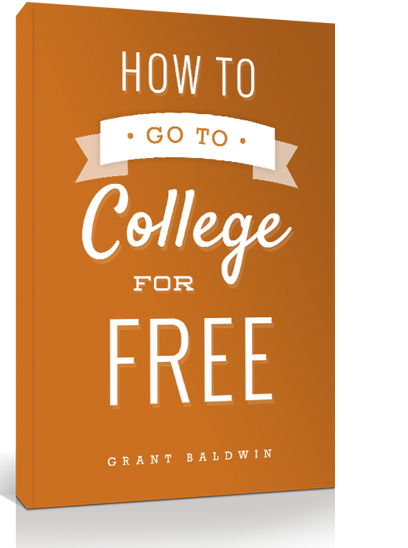 In one weekend,
learn how to earn
a debt-free
college education.
As a motivational speaker, I’ve met thousands of students across the country who want to attend college but have no idea how to pay for it. I’ve also met many parents who want to help their child with the college process but just don’t know where to begin. Have you felt like this before?College is just too expensive. It’s impossible to graduate without debt. Student loans are just a necessary evil for education. Finding and applying for scholarships is just too much work. Filling out the FAFSA is too complicated. The economy and job market are too uncertain to know if college is even worth it.

71% of college graduates last year had student loan debt. Don’t be like everyone else.

Convinced? Jump straight to the packages.

“It’s impossible to graduate without debt”

This is what most people say and believe. And to be honest, those people are almost correct. Is it really, really difficult to graduate without debt? Absolutely!But is it impossible? Of course not!

I’ve met countless students who graduated debt free. They were no different than you. They weren’t valedictorian. They may not have been student body president. They didn’t have someone to just write a fat check to the college.

They busted their butts to avoid loans and earn a debt free degree.

They didn’t just get one massive scholarship. They didn’t have to work 80 hours a week while going to school. They didn’t know some secret you didn’t.

So what did they do?

They made a plan. And their plan wasn’t based off one source of financial aid.

They earned scholarships. They worked a part-time job. They went to a lower cost school. They took classes at community college and transferred them. They lived at home to save money. They took AP classes and CLEP tests.

It wasn’t one thing they did. It was a collection of actions and hard work that earned them that debt free degree.

“Finding and applying for scholarships
is too much work.”

Earning scholarships can be a bit of a numbers game. Simple math tells us that the more you apply for, the greater your chance are to earn some.

But in addition to finding sources of scholarships (which we’ll teach you), there are steps you can take to make your application stand out from the crowd.

We’ll help you develop a strategy and game plan to know where to look and know how to improve your application to increase your chances of earning scholarship money.

You’re absolutely correct. It’s a lot easier to sign your name to some piece of paper that then gives you the funds to pay for college.

But the problem is that doesn’t release you from the financial responsibility. Either now or later, colleges will get your money!

And if you delay the inevitable, you’ll end up paying more for it down the road.

Creating a game plan to pay for college now is really hard work. It’s not easy at all. I don’t want to mislead you to think that in anyway.

That’s why most students just take the path of least resistance and accept loans.

But it is possible to earn a debt free degree and avoid the pain of student loan debt.

“My degree will land me a job that earns
me enough to pay off my student loans.”

That would be nice if you knew that was guaranteed. But you don’t.

None of us have any idea what the job market or economy will be like years from now when you graduate and start looking for a career.

Let’s say you took out a sizable amount of student loans banking on landing a high-paying job at graduation. But what do you do if you graduate with all that debt and the high-paying job was no longer available?

You can control how you pay for college today. You aren’t guaranteed anything in the job market tomorrow.

“How To Go To College For Free” helps
simplify the process of paying for college.

Say goodbye to feeling overwhelmed and confused.
And say hello to having a plan you can confidently follow.

The more strategies you know and apply, the easier it will be to avoid student loans.

Learn from real students who graduated debt-free – without mom or dad writing a check!

Eliminate excuses and know how to start creating a plan to pay for college. 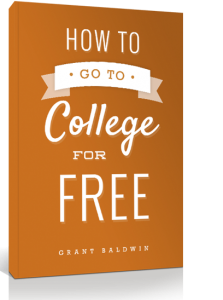 Get A Free Sample Chapter!

We won’t send you spam. Unsubscribe at any time.

So who’s behind all this stuff?

GRANT BALDWIN is an engaging communicator and a
leading teen expert who is making a significant impact
in the lives of students across the country. In addition
to authoring Reality Check, Grant has spoken to over
350,000 students in 48 states at student leadership
conferences, conventions, school assemblies, and 
other youth events. Grant wrote Reality Check for 
your students as a guide to help them prepare for
life after high school. 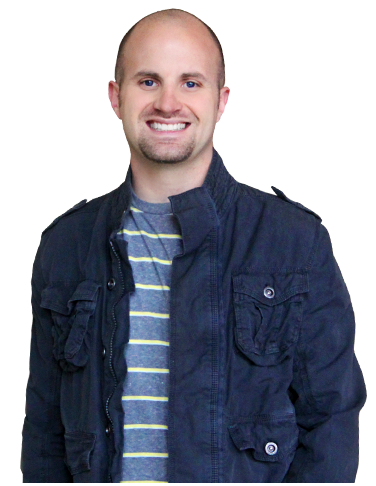 HOW TO GO TO
COLLEGE FOR FREE
EBOOK (PDF)
89 pages of solid advice on scholarships, the FAFSA, comparing college costs and more strategies to earn a college degree without the debt.

FINANCIAL
PLANNING SPREADSHEET
Figure up exactly what your education will cost and where that money is coming from.

PLANNING TIMELINE
Keep on track with this tool to know exactly what you need to be working on at any given time leading up to your start of college.

INTERVIEW:
TAMARA KRAUSE
(From ScholarshipExperts.com)
Learn everything you wanted to know about scholarships from one of the top experts.

INTERVIEW:
HOLLEE ELLIS
(Scholarship Committee Member) Find out the number one thing Hollee looks for when awarding scholarships to students.

INTERVIEW:
KATIE MOTT
(Iowa State University)
Learn why you should view applying for scholarships as your part time job.

INTERVIEW:
JUSTIN CHASE BROWN
(University of Missouri)
Learn what Justin sees as the main difference between students who need loans and those who do not.

INTERVIEW:
THOMAS FRANK
(Iowa State University Graduate) Graduated with no debt. Learn how he applied for 20 scholarships and got none of them but then was awarded a full-ride scholarship!

INTERVIEW:
JESSICA GILLESPIE
(University of Idaho
student)
Hear how one simple conversation with her family changed everything for how she was going to pay for college.

INTERVIEW:
LACEY TIMONY
(Penn State University student)
Hear from this 30 year old college student about how she came back to school to complete her degree debt free.

INTERVIEW:
CHRIS TEAGUE
(Former Army/College Graduate)
Learn exactly how the military helped pay for Chris’ education and what you need to know about this path.

HOW TO GO TO
COLLEGE FOR FREE
EBOOK (PDF)
89 pages of solid advice on scholarships, the FAFSA, comparing college costs and more strategies to earn a college degree without the debt.

FINANCIAL
PLANNING
SPREADSHEET
Figure up exactly what your education will cost and where that money is coming from.

INTERVIEW:
TAMARA KRAUSE
(From ScholarshipExperts.com)
Learn everything you wanted to know about scholarships from one of the top experts.

INTERVIEW:
KATIE MOTT
(Iowa State University)
Learn why you should view applying for scholarships as your part time job.

INTERVIEW:
LACEY TIMONY
(Penn State University student)
Hear from this 30 year old college student about how she came back to school to complete her degree debt free.

INTERVIEW:
HOLLEE ELLIS
(Scholarship Committee Member) Find out the number one thing Hollee looks for when awarding scholarships to students.

HOW TO GO TO COLLEGE FOR FREE EBOOK (PDF)
The interviews and additional resources are very useful, but don’t overlook the value of the book by itself. It is a guide you will regularly refer back to help create your game plan for paying for college. If budget is an issue, no problem. Definitely get the book by itself. You won’t regret it. 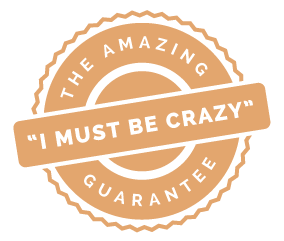 Using and applying the information in this guide, I guarantee
that you’ll earn an additional $2,500 for school or reduce the
cost of your education by $2,500 within 90 days. If not, I’ll give
you your money back – even if you love the guide.

I believe that if you take action and actually do what this resource teaches, you’ll come out ahead. Obviously I think you’ll be able to earn a lot more than $2,500 for college, but I want to prove that this guide will provide more value than the money you pay for it.

Do you really believe you
can graduate from college
with no debt?

YES! I wouldn’t waste my time creating this or your time reading this if I didn’t think it was not only possible but very realistic. Make no mistake though…you can graduate from college debt free, but it will not be easy.

I’m confident you’ll love the materials because they were created with you in mind. But if you don’t like the resources for whatever reason, just forward your receipt email within 90 days to grant@grantbaldwin.com, and we’ll issue you a refund.

Which package should I buy?

A big factor is obviously your budget. The complete package is designed to give you the most bang for your buck, but the book itself is still packed with lots of useful strategies and tactics that will help you.

Where can I learn more
about you?

Check out www.GrantBaldwin.com to learn more about who I am and what I do. You can also find me on Twitter @grantbaldwin.

If you still have questions, please email us at grant@grantbaldwin.com.

How To Go To
College For Free
PDF ebook.

If budget is an issue, no problem. Definitely get the book by itself. You won’t regret it.